Fighting “Russian disinformation” in the West has become a lucrative business. But, in reality, you’re far more likely to encounter deceitful agitprop directed at Russia.

CP Scott remains a towering figure in the annals of British journalism. Editor of the then “Manchester Guardian” for an astonishing 57 years, he celebrated his paper’s centenary by laying down a set of legendary principles.

“Comment is free, but facts are sacred,” Scott intoned in the missive. Sadly, almost a hundred years later, facts are free and the right to spread disinformation is becoming sacred, as far as his successors are concerned. Particularly when it comes to coverage of Russia.

Yet another example came over the New Year break. Following a few weeks out of the spotlight after peddling an obviously fake story about Julian Assange/Paul Manafort meetings in London, Luke Harding reappeared. And he came armed with his particular brand of bulls*** and sloppiness.

A sensationalist interview with former Soviet spy ‘Viktor Suvorov‘ was full of fragile fact-checking and downright stupidity. For instance, presenting a pensioner, who defected from a different country almost 40 years ago, as an authority on how Vladimir Putin’s Kremlin operates today stretched credulity. And the piece was also riddled with factual errors, to boot.

For instance, Harding claimed Suvorov’s 1980’s book “Icebreaker” now “has broad acceptance among historians;” a tome which insists “Stalin had been secretly plotting an offensive against Hitler’s Germany” but first he “wanted Hitler to destroy democracy in Europe, in the manner of an icebreaker, thereby clearing the way for world communism.” In other words, not the version you learned at school.

Except, surprise, surprise, this statement on Suvorov’s book isn’t true. As one scholar pointed out, while demanding a correction from Harding, it’s more accurate to say the opposite is the case. Indeed, the scholar referenced, “Suvorov’s argument was rapidly countered by much of the established Russian historical community,” including Dmitry Volkogonov, “with the support of Western historians.”

We’ve been here before with Harding. He’s repeatedly weaved fantastical stories about Russia, and other subjects, for years. But, as the legendary ex-Moscow hack Mark Ames observes “literally nothing Harding publishes, no matter how demonstrably false and reckless, will ever hurt his journalism career. He’s a Made Man.“

Guardian hack Luke Harding was caught plagiarizing me, @yashalevine & others—and it had zero effect on his career advancement. If his latest “scoop” on Manafort/Assange is debunked, there will be zero consequences. Most of us still can’t fully grasp this https://twitter.com/markamesexiled/status/938091140594757634?s=21 …

All too fitting that Luke Harding—who was caught repeatedly plagiarizing myself, @yashalevine & other Russia-based reporters—is today’s leading Russiagate expert 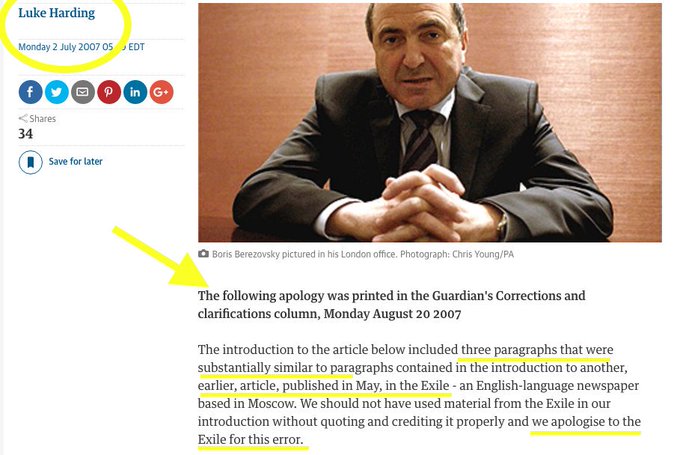 901 people are talking about this

And, while he’s an especially blatant example, Harding is not alone in this. Because on the Russia beat, it seems Western journalists can pretty much get away with any transgressions, without suffering career damage. Instead, paradoxically, it often seems to even lead to professional progression.

Today, you hear a lot of hysteria concerning “Russian disinformation” in the West, but little or nothing, in mainstream media, on “disinformation about Russia,” something this writer has tried to cover in recent years. And it’s a lonely beat.

Indeed, as the Canadian academic Paul Robinson rightly notes, while “there’s a huge army of well-funded institutions and individuals now devoted to uncovering and countering ‘Russian disinformation,’ there seems to be little or no accountability for the false stories produced by Western sources (on Russia).“

And the examples are legion. With even the most heinous fakes failing to amount to any sort of setback for their promoters. Which suggests editors are more than happy to indulge the practice, because after all it’s only Russia and everyone knows Russia is “bad.”

Here are a few selected lowlights…

Numerous other examples exist but more are hardly needed to show how there seems to be no penalty for getting Russia wrong in Western media. And, on the contrary, it’s hardly a conspiracy theory to suggest it’s actively encouraged.

Which means, of course, disinformation about Russia is far more common, organized and influential than notional “Russian disinformation.” Particularly on social networks, but prevalent too in supposedly “respectable” media.

Nevertheless, don’t hold your breath waiting for the usual think tank “info war” chancers to issue reports, dripping with condemnation. Because this isn’t about delivering truth in the news, it’s about keeping control of the narrative.

By Kenneth Stepp Even though I wrote the title to this, those words look very odd together. But I believe we should think of them as a team always. Talk [Read More]

Search for suspect who shot woman inside Kroger

April 19, 2019 Kenneth Stepp Georgia News Comments Off on Search for suspect who shot woman inside Kroger